The data analysis company Skew.com shows in a chart that during yesterday’s drop in Bitcoin price, within 20 minutes long positions on the derivatives exchange BitMEX worth more than $28 million were liquidated. This temporal correlation could be observed in many smaller corrections of Bitcoin in the last days and weeks. The influence of BitMEX on the Bitcoin price thus remains strong. 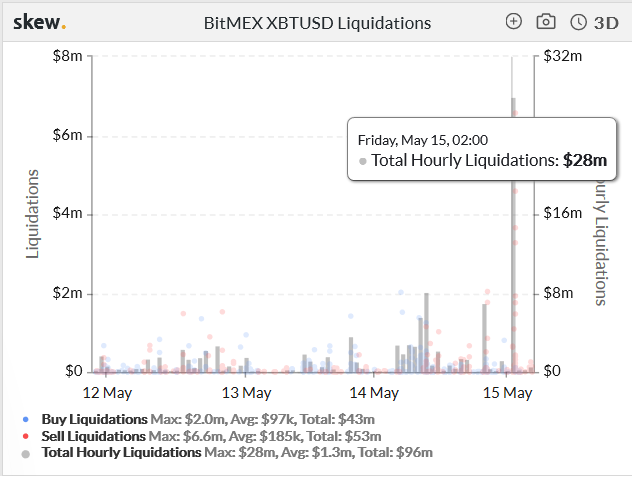 Popular trader Josh Rager said that Bitcoin must close above the $9,550 mark on the daily chart to continue its upward trend. If BTC fails to do so, Bitcoin could reach a new local high along the $10,000 mark, which will have to be defended before the price can rise further.

There’s the breakdown and bounce in low $9ks

Nice wick, watching for a close back above $9550

If not, then likely a sign that this was a local top https://t.co/V5cRNFyhYt pic.twitter.com/wravjQTlVW

According to HornHairs, Bitcoin has so far moved above its personally set indicator, which is why he remains bullish. According to the trader’s analysis, Bitcoin has to close above the $9,350 mark, so that the price can rise to the $10,500 mark as its next target. He also says that there are good opportunities for traders as Bitcoin will continue to show high volatility in the coming days and weeks.

Price trading above my bull trigger, let’s see if it holds.

Above both the Monthly + Weekly S/R levels as well as the low time frame range high.

As we reported earlier, there was a gap along the $10,000 mark between the CME’s closing and opening prices last weekend. Crypto trader Teddy reports that this gap was closed by yesterday’s rally. Although this indicator is controversial in the community, Bitcoin has been able to close the gaps quite often in the past.

Perfectly closed the CME gap to the cent 🏁$BTC
( spotted by: @im_goomba ) pic.twitter.com/Y9PPcpQavZ

The gaps arise because the markets on the Chicago Mercantile Exchange (CME) are only open Monday through Friday and are closed on weekends. If, as happened recently, Bitcoin’s price closes at $10,000 on Friday and the opening price falls to $9,000 the following Monday due to poor performance, there will be a gap, which has almost always been closed in the past.

Is the issuance of Tether responsible for the price increase of Bitcoin?

Since March 30, 2020, the market capitalization of Tether has more than doubled from $4.3 billion to $8.8 billion at the time of writing. Tether has thus even in the short term ousted XRP from third place among the largest cryptocurrencies in terms of market capital. The explosive issue is that Tether is suspected of deliberately influencing the Bitcoin price by printing new USDT.

While there is no proven causal study to support this statement, the printing of new USDT often coincides with a price increase of Bitcoin. The following chart shows the rapid increase in newly printed USDT since the end of March.