Bitcoin’s third halving was one of the much-discussed and most exciting crypto events in 2020; it took place on May 11, 2020. Even the worldwide lockdown could not stop the King coin’s halving event. Interestingly, Bitcoin’s recent halving has resulted in many other cryptocurrencies and tokens recording significant gains. For instance, CyberVein‘s CVT token, as seen in the below-attached chart, although saw a slight drop in price post May 12, has recovered and is trading at $0.035102[as of press time].

In fact, a lot of altcoins have surged following the big market crash in March. It can be noticed how CVT reached significant heights in April. Starting March 23, the coin rose up by 564.97% in a period of 16 days. This makes sense because if looked at it, many altcoins have surged before and after the BTC halving date. Be it ETH, LTC, XRP – all coins have seen significant gains. 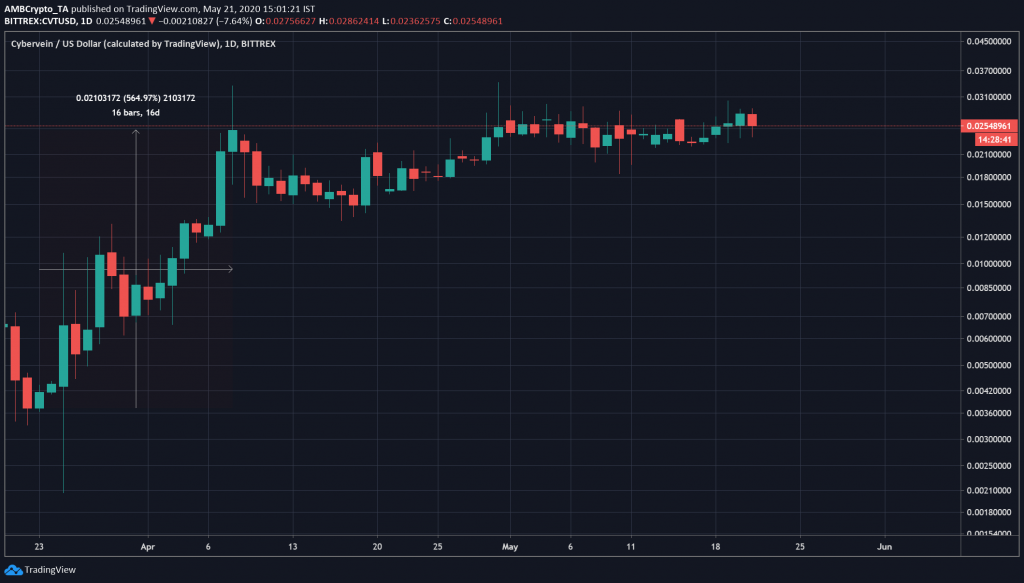 That said, CVT ranks at the 114th position on CoinMarketCap at the moment, and this massive price rise is indeed surprising. Thus by looking at how altcoins have surged post BTC halving and analyzing CVT’s performance, the token might follow an uptrend in the near future.

Now, one thing to take note of here is that, for a coin to perform well, the design and the technology used also plays an important role and CyberVein’s development team has designed its token in such a way that it addresses all the limitations that other tokens might be facing.

CyberVein uses DAG technology which can simplify the life of any business that operates with vast amounts of data. The platform’s blockchain network does a fine job of handling the massive information. As a result of this growing technology, CyberVein’s token has also gained a lot of traction lately.

Commenting on the same, in a recent interview with AMBCrypto, Jack Ge, the Managing Director at CyberVein, had stated,

“CVT rose up from 300ish to the current position. That’s a big jump for us. And the step forward will be finding the intricate balance between technology and marketing. The technology is pretty sound right now and the development is going very well. There are quite a lot of developments going on in terms of marketing as well which will boost our credibility and get more people to actually hear from us.”

On the other hand, Bitcoin’s correlation with the equity assets also has greater effects than one might think on altcoins. As seen in the above charts, at the moment, the BTC-GLD correlation has completely declined while BTC-SPX has been on the rise. As many analysts have noted earlier, BTC and other crypto coins will flourish only when they are uncorrelated with traditional assets.

CyberVein’s PoC contributes to the development of CVT by generating rewards. The firm uses enhanced privacy techniques that protect user privacy and data security by building a machine learning big data analysis and model for the third parties which will have broad application prospects in the sales, finance, and supply chain industries.

CyberVein, the first distributed ledger system allowing for the decentralized management of complex datasets on the blockchain itself, without requiring centralized storage providers. Though it has been around only for a short period of time, it has seen significant growth in the past year.

It is focused on improving data storage, sharing, monetization, and employing federated learning principles to build efficient real-world models. It offers three products to achieve this – the PISR Database for private database management, DAG network for public storage and distribution, and the Federated Learning platform which enables machine learning of large corpus of decentralized data, as highlighted by the platform’s Managing Director.

Disclaimer: This a paid post, and should not be treated as news/advice.