IF JEFF RIPPLE WERE A CINEMATOGRAPHER, he’d be a master of the extreme wide shot — that initial, opening shot that establishes where you are.

As a painter, he loves wide, open spaces and is often found there, capturing the vastness of our natural landscape on canvas.

“So often (my) paintings are about a moment in time,” the Florida native says. “It’s a timeless moment in time. It could be any time, really: the daybreak over the Waccasassa River with big clouds going over you. Or on the gulf coast, the big storms that build up over the water and come into the shore. You’re being stormed on. Or you have the sun coming up, and all this glorious light. It’s a moment.”

He roams Florida’s parks. He often takes a canoe out on the water and, after stabilizing the vessel, stands and makes sketches or paintings he’ll use for reference back in the studio. 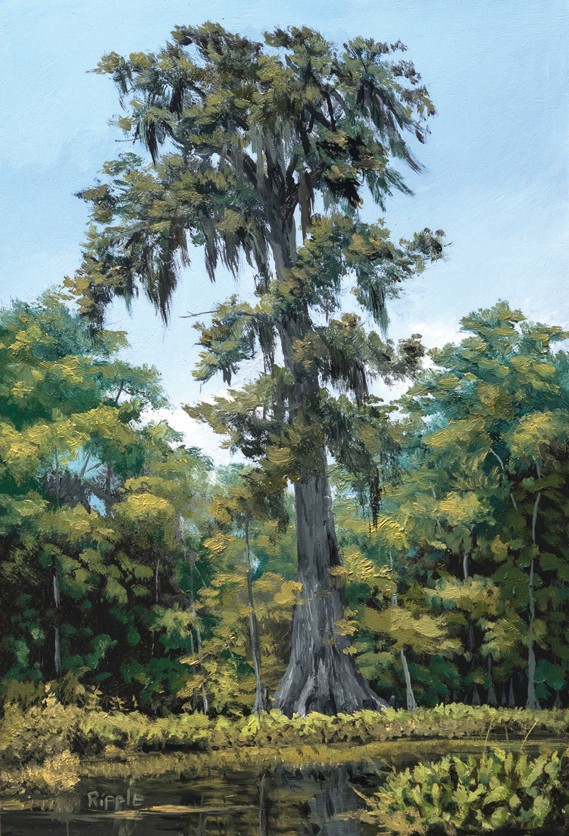 “The difference is amazing, standing 5’9” above the water,” he says about standing to paint. “The view changes dramatically. The higher you are, the longer your viewpoint.”

Just compare what you see when you’re sitting on the floor as opposed to standing on top of your car; it’s a much different view, he says.

“Standing in the canoe is exactly what I need,” he says. But, he allows, “I’m particular about when I do that. It has to be calm. I can’t have boats going by and wakes, or I’d probably wind up in the drink with my painting.”

When he paddles out into the Everglades, he says, “I jam broom sticks into the mud and lash them to the stabilizers, so I don’t wiggle around. I’m locked in place in the marsh. It anchors me in place.”

Mr. Ripple, who grew up in Fort Lauderdale and recently moved to Tallahassee, began his artistic career as a photographer, taking close-ups of frogs and lizards, wading out into the Everglades and waiting for them.

“But while waiting, immersed in water, you have a ton of time to look around and soak up the landscape around you,” he says. “After a couple years of that, I started feeling the landscape in a visceral way.”

But then, he says, photography went digital.

“It seemed like an arms race,” he says. “Every year bigger, badder cameras with upgraded software. I thought, this is it, and I taught myself to paint.”

The first paintings were not very good, he admits.

“That happens to most people,” he says. “There was no one around to correct me, but at least I knew what was good and what wasn’t.”

Initially, of course, he didn’t have the technique, the motor skills or the muscle memories.

“I’m not all the way there yet, but each time it gets easier,” he says. “It’s just like any artist. As a musician, even at a professional level, you have to practice your scales for hours and hours. You have to practice as a visual artist. Do little studies, sketches with pencil, or oil, pastels, watercolors — something fast, something you can practice without investing a lot of time, effort and material. I do all of the above, and they all feed into each other.”

While much of the world shelters at home due to the pandemic, Mr. Ripple visits forests and goes out ono water in his canoe or kayak.

“I go out all alone,” he says, and works in isolation, not near other people. It’s how he usually works, anyway, he notes. 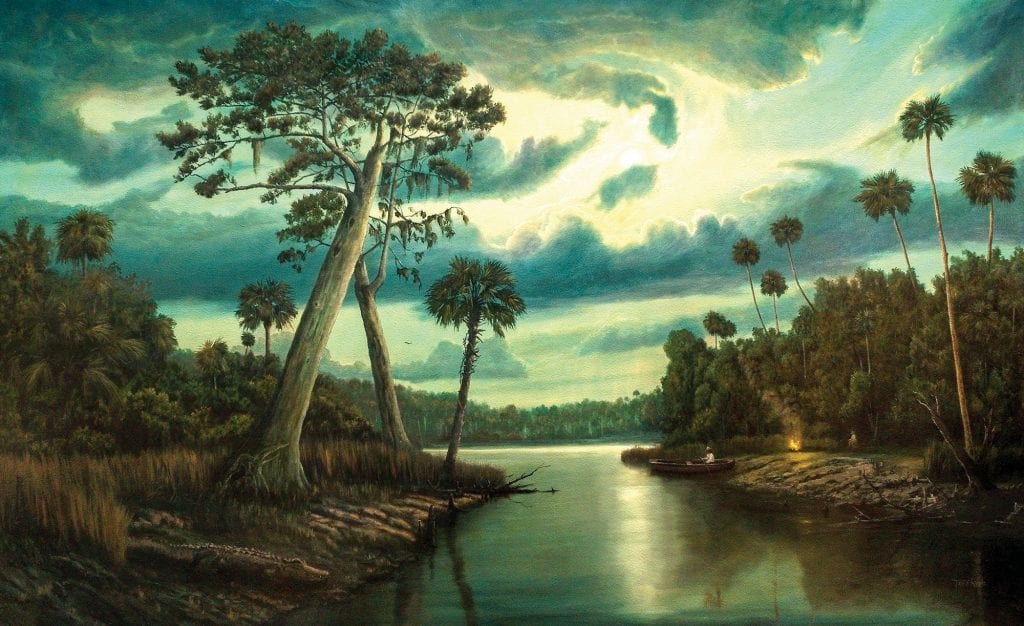 “The Waccasassa Under Moonlight,” by Jeff Ripple.

What is it about the Florida landscape that appeals to him so much?

“It’s home, first of all,” he says. “I have a personal attachment to it. And it’s very subtle. And because of that subtlety, so much of the drama and excitement for me, is in the sky.”

In most of his paintings the sky is prominent.

As an example, he points out his painting “Evocation 1,” in which the sky is “obviously the main thing going on. It’s got the most space — not by a lot, but your attention goes there. It’s front and center, with the beams coming out.”

Another painting, “Daybreak Over the Waccasassa,” shows daybreak exploding over the east.

In his artist’s statement online, Mr. Ripple talks about 19th century American painter Asher Durand’s idea that painting nature is “fraught with high and holy meaning” and the job of landscape painters is to reveal “the deep meaning of the real creation around and within us.”

Like Mr. Durand and the other Luminists and Hudson River Valley painters, Mr. Ripple creates glowing, romanticized landscapes that speak of promise and possibility.

Many of his paintings depict a little campfire, or a canoe or boat, or a little house, the landscape so vast around them.

“I like that idea, that the landscape is so big and we’re pretty small and we damn well better remember that,” he says.

Occasionally, he’ll put a person in his painting to express that idea.

For example, in “Waccasassa Under Moonlight,” he says, “there’s a giant old grove cypress tree and sable palms — skinny, almost Muppet-like palm trees — and an alligator in the lower left. And close to the main river, you’ve got a man in a rowboat and a little campfire going on, and another person.”

He did it in a limited palette that “screams Hudson River Valley,” he says, explaining that he applied a warm and cool of each color he used.

Despite the fact that more and more Florida land is being developed, he doesn’t feel as if he’s painting something that’s dying.

“I’m trying to make people appreciate what we have, this is what’s alive and what we have right now,” he says. “It’s important for us to appreciate it, and often the best way to show that is to support it financially and support it through our votes. To preserve it.

“I’m not the first to notice this, but with so much less human activity (during the coronavirus crisis), people around the world are noticing … the songbirds in the trees, frogs in their ponds or animals walking down the street. These are things that are around us all around, but as a species, we shove them off to the side. We like them when it’s convenient to like them, otherwise we try our very best to make them go away.”

It’s the same with the landscape, the artist believes. That’s what he tells curious viewers who ask what he was thinking when he did a particular painting.

“I explain to them, and it changes their ability to see,” he says. “They leave a conversation with me, or with my paintings or photographs, with a new ability to see, should they choose to use it.

“I would think that would make their life more meaningful. If they leave with a new ability to see and appreciate the world around them, that’s great.” ¦