Although yesterday’s “Halving crash” has not only severely affected Bitcoin (BTC), but also the entire crypto market and especially the second largest cryptocurrency by market capital, Ethereum, as well. However, various analyses show that Ethereum is primed for a bull run. Thus, data on accumulation by large investors show that Ethereum is the Altcoin that could make the biggest price gains over Bitcoin in the coming days and weeks.

After the crash, the Ether (ETH) price has fallen back below the USD 200 mark, but a sign of fundamental strength can currently be observed. Investors are using the current phase to buy larger quantities of ETH. The company Santiment has published an analysis on this and explained that the majority of Altcoins have recently seen investors exiting the market, while ETH has seen growth.

As Santiment states, the key to making an investment decision is to find out in which Altcoins the whales in the market invest. Santiment’s chart below clearly shows that this is Ethereum. In this sense Santiment states:

Finding which altcoin will balloon next often comes down to directly comparing what top holders are investing in next behind the curtains. Currently, it appears most alts are selling, while ETH holders are accumulating. DM us for access to this model.

Santiment already noted last week that the centralization among the top 100 wallets has increased, which now account for around 25 percent of the total Ethereum supply. The analyst firm also argued that the data suggests that major investors “collectively believe” that the cryptocurrency is undervalued in light of the upcoming upgrade to Ethereum 2.0.

The top 100 holders of #Ethereum are once again beginning to accumulate higher percentages of the total token supply, in spite of the ongoing consolidation that has been occurring for the past couple of weeks. Generally, when this kind of accumulation starts to mount, it’s a pic.twitter.com/Rr5C8vuE97

Skew’s data on the “Realized Correlation” also shows that the 1-month correlation of ETH and BTC has dropped to 84 percent, after being much higher both a few months ago and a year ago. Should the “decoupling” continue, Ethereum could be less dependent on the price movements of Bitcoin and could start a strong rally with the launch of ETH 2.0. 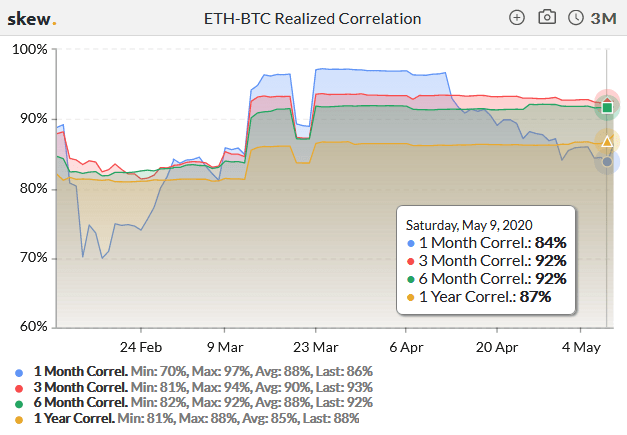 Will Ethereum 2.0 trigger a bull run?

But not only the data of Santiment and Skew paint a bullish picture for Ethereum. Numerous experts have also commented on Ethereum 2.0 and its impact on the ETH price. The tenor was always bullish. Su Zhu, CEO of Three Arrow Capital spoke of an impending supply shock triggered by the upgrade to the proof of stake. This view was shared by Adam Cochran, former Marketing Director of Dogecoin. He explained that Ethereum 2.0 will be the engine of unprecedented “economic change” as soon as it is launched.

The supply shock is already evident through the world’s largest crypto asset manager, Grayscale Investments. A recent report from Grayscale showed that the company received $388.9 million in inflows to the Ethereum Trust in the first quarter of 2020, “claiming” almost 50 percent of all new Ethers (ETH).