A new survey finds crypto holders to be a savvy but media-influenced group, and small but growing fast.

The UK’s Financial Conduct Authority has authoritatively conducted a financial survey on cryptocurrencies, featuring a nationally representative sample of more than 2,000 respondents.

It’s one of the most comprehensive crypto surveys around, diving deep in an effort to seriously assess the risk cryptocurrencies pose to consumers in order to craft a more informed regulatory response to them.

It’s kind of awkward, then, that the survey found that the vast majority of cryptocurrency owners are very well informed about it, regard it as more of a fun gamble rather than a serious investment, tend to buy only small amounts, very rarely purchase it with borrowed money, are under no illusions as to their lack of legal protections and are mostly perfectly happy with their purchases.

In this case the nanny state arrived only to find that the children had already brushed their teeth, tucked themselves into bed and and gone to sleep at a sensible hour. It must have come as a real disappointment to everyone hoping for an excuse to whip the brats into shape.

Still, the FCA’s survey is an eye-opener with a few particularly eye-catching results.

1. 42% of respondents last year said they’d ever heard of cryptocurrency. 73% said so this year.

It’s a remarkable result for several reasons. Firstly as an example of how quickly something can fade from public consciousness, and secondly because of the recent growth it illustrates.

Cryptocurrency awareness appears to have grown dramatically over the last year even without any big price bubbles to fuel it. It suggests a healthier, slower-burning type of growth than the industry previously experienced.

Overall last year’s numbers are somewhat lower than what US surveys found with the same question at a similar time, suggesting a lower level of cryptocurrency awareness in the UK than the US.

We can’t say for sure why this is, but it loosely suggests that many cryptocurrency buyers make their purchases shortly after hearing about it for the first time instead of sitting on the decision for a year or more.

If you had to guess which cryptocurrencies most people have heard of, you’d probably guess Bitcoin.

But you probably wouldn’t have guessed Bitcoin SV… unless you’re a Bitcoin SV enthusiast in which case you’re probably surprised it’s that low, given that it’s obviously the one true Bitcoin and it’s going to take over the world and all. 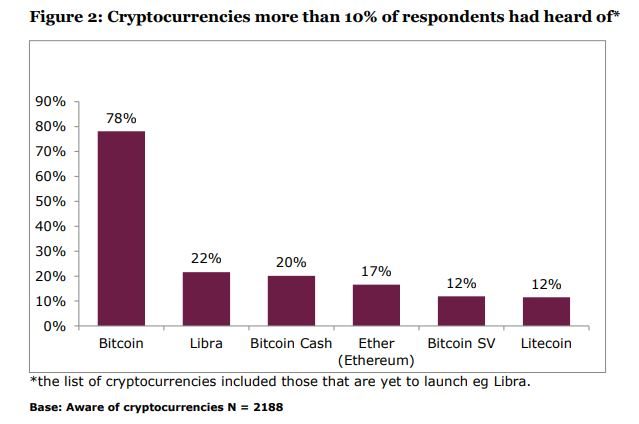 You’d probably find different results in different countries – Bitcoin SV is largely based in the UK – and it naturally goes hand in hand with interest in Bitcoin Cash.

The high level of awareness of Libra may not be especially surprising either, and really goes to show how impactful it was despite its failure to launch as intended. Although it’s still funny to note that more people literally believe in astrology than have heard of Facebook’s Libra.

One of the more surprising results here is the absence of XRP. The former crypto market darling was one of the most popular cryptocurrencies on UK-oriented trading platform eToro in mid 2018, but now it’s relatively unknown.

However, it’s worth emphasising that the above table shows the results among all those who had heard of cryptocurrency, rather than those who own it. Awareness of more coins was significantly higher among those who actually owned crypto, with 77% of crypto owners recognising 3 or more different cryptocurrencies.

Media coverage, including both traditional media and online media in equal shares, is the main way most people are first introduced to cryptocurrency, especially this year compared to last year.

Last year more people were hearing about it by word of mouth or advertising, but this year it’s mostly in the news. 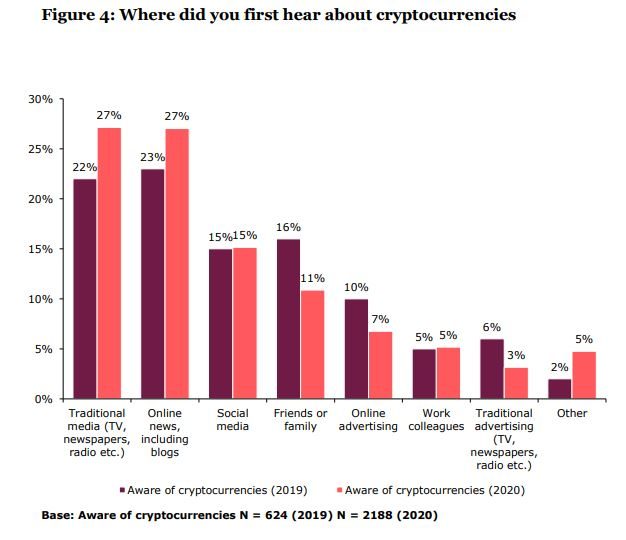 Advertising also makes a difference. Assuming the survey results can actually be generalised to the whole country, 45% of all current and previous UK cryptocurrency owners said they had seen a cryptocurrency related advert, and of those 35% said it made them more likely to buy cryptocurrency.

The influence of advertising may also be significantly understated if you factor in native advertising, and ever stop to marvel at how many popular crypto brand names you can jam into a piece of news if you try.

4. Most cryptocurrency owners are remarkably savvy

Of those who owned cryptocurrencies:

5. The UK loves Coinbase. Local exchanges not so much.

77% of respondents who owned cryptocurrency said they bought through an online exchange. Of those, only 5% used UK-based exchanges exclusively, and only 12% used both UK and overseas exchanges.

A whopping 83% said they exclusively used overseas exchanges, with the most popular by a very long shot being Coinbase, followed at a fair distance by Binance, Kraken, Bittrex and Bitfinex. 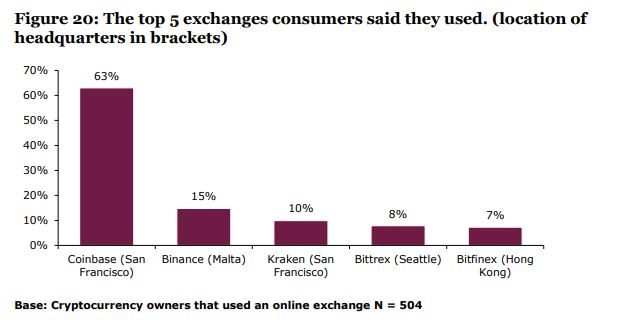 One big takeaway here is perhaps the scale of Coinbase’s first-mover advantage, and how big the UK market is for it. It started serving European users in 2014, back when the UK was still part of Europe, and by 2017 Europe was Coinbase’s fastest growing market with the UK being Coinbase’s biggest country in Europe.

Disclosure: The author holds BNB, BTC at the time of writing.

Disclaimer:
This information should not be interpreted as an endorsement of cryptocurrency or any specific provider,
service or offering. It is not a recommendation to trade. Cryptocurrencies are speculative, complex and
involve significant risks – they are highly volatile and sensitive to secondary activity. Performance
is unpredictable and past performance is no guarantee of future performance. Consider your own
circumstances, and obtain your own advice, before relying on this information. You should also verify
the nature of any product or service (including its legal status and relevant regulatory requirements)
and consult the relevant Regulators’ websites before making any decision. Finder, or the author, may
have holdings in the cryptocurrencies discussed.